It is important that retailers prepare as soon as possible to reduce the risk of crashes or errors, for example, which can lead to lost time and money and worse: unhappy customers and problems with consumer protection agencies.

A recent estimate by the Brazilian Association of Electronic Commerce (ABComm) predicts that Black Friday should bring in R$6.05 billion in e-commerce, with orders reaching 8.3 million this year. The value is equal to an increase of 3.5% compared to last year, and the most sought-after sectors are electronics, IT, telephony, household appliances and small appliances, followed by fashion, beauty and health.

Any sensitive behavior that goes out of the norm, the system generates an alert for the team, based on artificial intelligence, drastically reducing the possibility of errors or mistakes in any operation.

If on the one hand the news is good, on the other it requires caution. Because the more people consume, the greater the chances of inaccuracies. For example: on Black Friday last year, an error in the Casas Bahia system put the retailer in a bad light in front of consumers and Procon-SP. It all started because on the day before the holiday shopping season, the company’s website offered the Samsung Galaxy Note 20 smartphones for R$679.00 and the Galaxy S20 FE for R$1000. Both devices at that time could only be found in the competition for prices of R$ 2 thousand and 4 thousand. Obviously, many were delighted with the great offer and concluded the purchase. However, not long after, they received a notification about the cancellation of the transaction. Payment by bank receipt entitles you to a gift card. The picture was returned immediately, and purchases on the card were returned in the following days. Not to mention the frustration of consumers who filled the Reclame Aqui page, Twitter and other networks with hashtags like #casasbahiapropagandaenganos, and also sent several complaints about Procon.

But, after all, where did this problem come from?
“Samsung Galaxy smartphone price variations occurred due to a processing error. Customers with the amount indicated by the system as currently incorrect have canceled their purchase and received a refund,” parent company Casas Bahia said.

This is just one story of a sales dream that turned into a nightmare – for companies and for customers.

In addition, the inability to access systems, difficulties in providing payments and sending confirmations, page down… The fact is that no e-commerce company is free from this type of mishap, neither on Black Friday nor on any other day. And as for every cause there is a consequence, in such cases the result is always the loss of money and work, the possibility of leakage of user data, return of value, problems with consumer protection agencies, negative exposure of the brand, and here it goes. And if there is anything positive to be learned from these situations, the lesson is this: how important it is for companies to have a “plan B” to prevent (or at least try to mitigate) errors, overloads or outages, after IT experts guarantee: “it is not uncommon that malfunctions occur on websites, systems or applications”.

Thus Emauri Gaspar, co-founder of the startup Run2biz, a global IT company focused on the development of agile technology solutions that simplify the everyday life of companies, comments that all obstacles of failures or breakdowns can be reduced, and often even zero, thanks to the visibility of artificial intelligence solutions for IT operations ( AIOps), which, with a huge capacity to consume and process in real time large amounts of data from different sources, can make predictions, generate alerts and prevent disruptions.

According to him, the key thing is in the detailed mapping of threats and shortcomings. It works like this: “on any sensitive behavior that goes out of the norm, the system generates an alert for the team, based on artificial intelligence, drastically reducing the possibility of errors or mistakes in any operation. So, no matter how much of a problem there is, predictive factor companies manage to solve it in time for the snowball effect, which starts with the initial state of a small action and grows based on that action, getting bigger (more serious) until it becomes potentially dangerous or fatal”.

Finally, Emauri emphasizes that, aiming to make human work more practical and intelligent, AIOps technologies, in addition to providing a holistic view of the entire IT environment, including network, applications and storage (physical and cloud), “is the most qualified instrument for predicting power outages and overload, connecting information and offering more power to the technicians and managers involved in the process, making them preoccupied with new strategies and management, instead of sticking to overloaded tasks with repetitive tasks and processing important data by eye”.

Artificial Intelligence for IT Operations (AIOps) 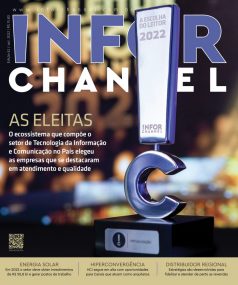 Enter your email to receive the most important news of the week.