Intel Corporation (BVMF:)(NASDAQ:) is in the news these days for all the wrong reasons. According to a Bloomberg report, America’s largest chip maker will cut thousands of jobs to cut costs and address a cooling PC market.

The layoffs will be announced before the end of the month, and the company plans to do so at the same time it releases its third-quarter earnings report on Oct. 27, according to the report. The chip manufacturer had 113,700 employees in July.

The news is the latest in a string of bad developments for the California-based company, which is in the midst of a major turnaround to revive growth and prevent competitors from taking its market share.

In July, Intel cut sales and earnings forecasts for the rest of the year, reporting much lower figures and warning that this year’s sales would be up to $11 billion short of forecasts.

Pat Gelsinger, Intel’s chief executive who took over last year, is urging patience as he fixes performance issues that have held back product launches and regains a competitive edge.

Intel’s share price, however, shows that investors have lost faith. Its shares, which have fallen more than 50% over the past year, are now trading at the highest margin compared to the industry benchmark, . Such a drastic drop in value pushed the company’s annual dividend yield to about 6%, the highest level in 10 years, according to InvestingPro data. 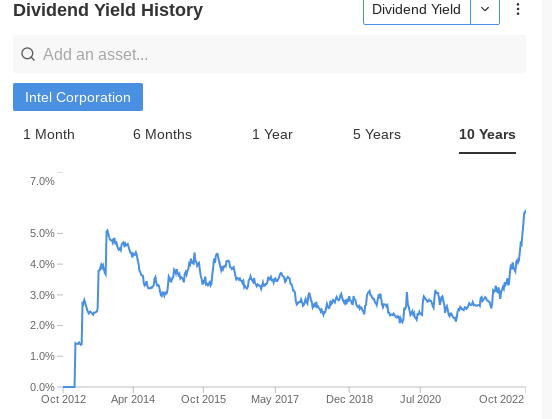 When dividend yields rise well above their normal levels, they often sound the alarm about the sustainability of a company’s payments. Although Intel has a 28-year history of non-stop dividend payments, rapidly declining sales and a tough competitive environment are raising concerns that the chipmaker may struggle to maintain its $5.6 billion annual dividend bill.

According to a Bloomberg report, with PC prices stagnating and demand weakening, Intel may also need to continue cutting its dividend to offset cash flow headwinds. While those concerns seem justified, especially with no end in sight to Intel’s manufacturing woes, I don’t think the risk of a dividend cut is as high as the market is pricing it.

Amid this flurry of bad news, one positive development that took a big burden off Intel’s shoulders to fund its expansion was the $30 billion chip smart financing deal Brookfield Asset Management Inc (TSX: ) signed this summer.

Under the deal, which company executives described as the first of its kind in the industry, Intel would finance 51% of the cost of building a new chip manufacturing facility in Chandler, Arizona, and have a controlling interest in the financing that would own the new factories. Brookfield will retain the rest of the equity, and the companies will share in the revenue that comes from the factories.

This financial arrangement signals that major investors have confidence in the company’s turnaround efforts. The funding will also ease pressure on Intel to cut its annual dividend of $1.46 a share as its revenue shrinks and the company undertakes a massive expansion.

Citi made similar arguments in a recent note:

“The deal should give Intel a bit of a boost before the factories start up and a bit of dilution after they produce semiconductors. While the deal should help ease Intel’s concerns about covering its 2023 dividend, we believe the biggest factor is an improvement.” Intel production. If Intel continues to lose interest in (BVMF:), we believe the company may be forced to reduce capex to preserve the dividend.”

Needham analysts also believe the partnership will strengthen Intel’s cash position and its ability to support its dividend. According to Needham, the program could allow Intel to achieve $15 billion less in capital expenditures than the traditional model. This in turn will increase the company’s free cash flows.

Apart from this deal, Intel predicts that the last quarter was the worst in terms of demand and things will improve from now on. Its customers operating with unused chip stocks are not placing new orders and will soon have to resume those purchases.

Intel’s rising dividend yield makes it clear that some investors see the possibility of a cut in their payout if things don’t improve, and the company acts to preserve its cash. This outcome, in my opinion, could have been avoided once Intel entered into a financing agreement with Brookfield and decided