Our “Tell Us About It” article today wants to know: Do you want to play more on console or PC? Although few people can have a quick and accurate answer to this question, I bet most people are still or have been divided on this question.

Let’s check out the pros and cons of each platform, and if you’re considering buying a next-gen gaming PC or console, perhaps this discussion can shed some light. Don’t forget to leave your thoughts in the comments, we want to know!

Console or PC? What is the best platform for entertainment with games?

First, I believe that there is no right answer to this question, it is all very relative, it cannot be denied. To balance the discussion, I suggest we consider a next-gen console, such as the PlayStation 5 and Xbox Series X, and a PC with a gamer setup running the same games.

advantages of the console

I’ll start by listing some of the advantages of console gaming.

Ease of use: consoles are easier to use, for sure. Just connect it to the TV, without any program installation or schedule. When it’s time to play, just turn it on, grab the controller and let the fun begin.

Comfort: As the consoles are always connected to the TV, this usually happens in the living room or bedroom, so players enjoy the games from the comfort of the bed or couch. Not that it can’t happen with a PC sitting in the bedroom, but it’s a much more common situation for console gamers. Computer users stay in chairs, but even though they are gaming chairs, many people still prefer the comfort of a couch.

Investment smaller: although in terms of investment it depends on the computer and its configurations, if we consider a high-capacity gaming computer, it will be more expensive than a video game console, even if they are the latest generation.

exclusive games: a detail that ends up winning many people over in the discussion is that there are several console-exclusive games today, mostly in relation to the PlayStation. While many games do eventually come to PC, it’s after many years, so anyone in a rush to enjoy these games will need to get a console to do so.

Advantages of a gaming computer 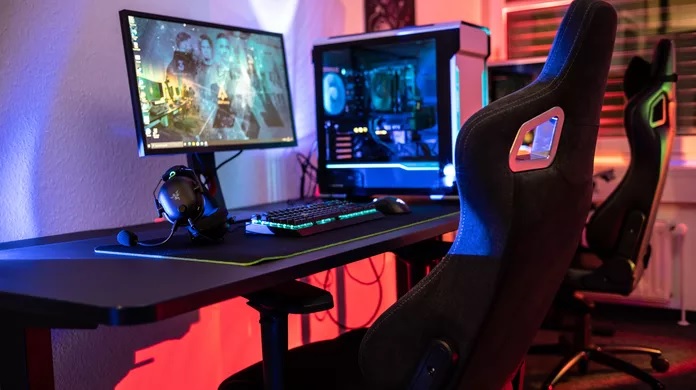 Now let’s look at some advantages of computers.

The best features: for those who play competitive games, the computer is at an advantage because with it it is possible, for example, to use the advantages of monitors that have 144 Hz, which guarantees a longer response time. It’s also easier to enjoy 4K resolutions without a big investment in a TV with this feature.

Keyboard and mouse/control preference: one of the great advantages of a computer is the use of a keyboard and mouse for games, mainly shooting games. While many games on console have aim assist, nothing compares to aiming with a mouse and guaranteeing a headshot. In that case, it is possible to use a keyboard and mouse on some consoles, as is the case with the Xbox, but this is still not common, as the console will hardly be close to a convenient place to use these peripherals. In addition, the computer supports original controllers, especially those for Xbox.

game prices: even though the prices of games have been rising a lot recently, there is still a difference between the amounts charged for consoles and PCs, even if it’s just digital games. So when it comes to investing in games, the computer has that advantage.

Updates and adjustments: consoles are getting smaller and the way to continue enjoying the latest generation games is to buy a new one. With a computer, it is only possible to change parts, and thus, although the initial price of the investment is higher in a computer, in the long run it can become a saving.

Versatility: one of the great advantages of playing with a computer is that it is not made just for that. In addition to gaming, you can also use it for studying, working, surfing the Internet, among many other functions.

This topic is very relative, even listing the advantages of a particular device will depend solely on the priorities of each person. All the above points can be questioned in this case.

I already had my doubts, but I had to consider my situation in order to make a choice. I love playing games, and when it came time to choose, I decided on a gaming laptop for several reasons. The first is that I need the mobility of a laptop for work and space, which turned out to be the most convenient.

Today I can put it in the living room or bedroom and connect it to the TV, play with a controller or at the desk with a keyboard and mouse whenever I want, so I love its versatility. However, while it has run all the games I’ve tried so far, not all of them run at full resolution.

The “Conta lá pra gente” section is a fixed panel on Hardware.com.br where interesting topics about the world of technology are put on the agenda so that you, the readers, can participate and communicate with us 😉