Your PC was running fine with Windows 10, but you followed Microsoft’s guidelines, upgraded your PC to Windows 11, and things started to go wrong as problems started appearing.

Well, know that you are not alone in this.

Crashes and lack of fluidity are some of the most common problems with Windows 11, which still has a lot to improve. These are not widespread problems because very powerful computers work very well with this version of the operating system.

If you are one of those users who have identified problems with the Windows 11 system, see in this post how you can solve these failures. 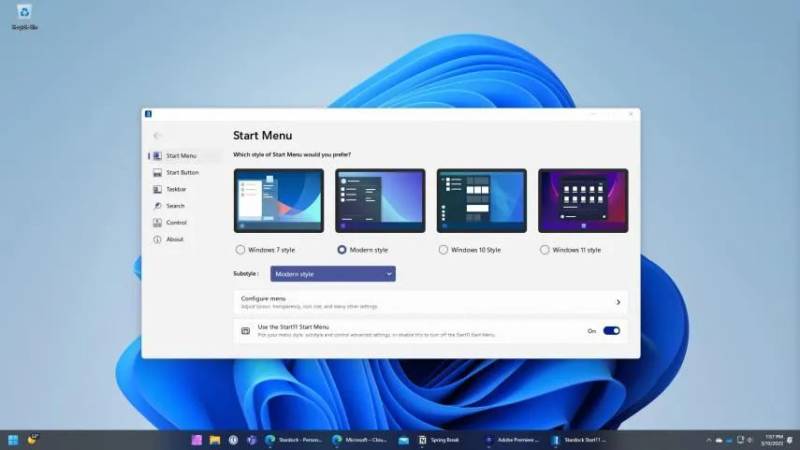 Microsoft made changes to the combination of elements on the taskbar and disabled Jump Lists in Windows 11, and this affected the experience of using the operating system for many people.

The best way to solve this problem is to use the Star11 app, which restores the Start menu and taskbar as before. The software works fine, but when we install a new program, you may be forced to restart the software to establish compatibility, not to mention inconsistencies with some jump lists.

Still, Star11 is worth a try if you want to get back the Start menu and taskbar you had in Windows 10.

You have run out of battery

Some of the laptops I’ve tested drain more battery with Windows 11, even when the hardware isn’t in use.

That’s because, by default, Windows 11 uses a modern sleep mode, which keeps the computer connected to WiFi in a low-power or sleep mode.

This makes reactivating Windows faster (just open the lid). On the other hand, the laptop battery drains faster because of this feature.

To fix this problem, you need to make a change in the Windows registry to disable Modern Standby.

Before we continue, it is not out of place to remind the reader that this type of modification in Windows involves a certain amount of knowledge, since we are changing the parameters of a sensitive area of ​​the operating system.

It is highly recommended that you back up your Windows registry data before making any changes. Or if you’re not sure what to do, don’t try the changes shown below. Or leave the notebook in the hands of those who understand the subject to make these changes for you.

Additionally, do the following:

The widget area is a zone in Windows 11 that displays widgets for faster access to other information, such as news, weather, calendar, events, and other information. It can be launched by pressing the Windows + W keys or by clicking on the lower left part of the taskbar.

Many users face an empty Widget area or no information. To resolve this, click the End Session button (in the upper right corner of the Widget area) and log in to this item again to display the information again.

Lack of fluidity in Windows 11

This problem can occur even on powerful computers, and it happens regardless of the type of hardware in the computer. In practice, Windows 11 behaves more slowly, with occasional crashes.

Browsing the Internet, sending and receiving e-mail, or creating and editing documents can be a big problem, with much slower performance than desired.

The vast majority of users claim that they experience occasional crashes, but it’s something that can become persistent and annoying. Here, the solution is more difficult to find because the analysis of the reasons for these falls is somewhat more complex.

In this case, the best solution is, oddly enough, to wait for Windows 11 to continue to mature to provide optimized performance. Microsoft is slowly rolling out updates to reduce or resolve outstanding issues.

It might not be the best solution for those looking for full PC performance, but it’s what we’ve got for today (or until Microsoft fixes the outstanding issues we don’t know about yet).