Tijucas was one of the 12 cities in Santa Catarina that joined the international program “Around Iberoamerica”, promoted by Veolia, together with the Organization of Ibero-American States (OEI). The partnership was made possible by the municipality through the Municipal Department of Education, which brought together local authorities and teachers on September 1 at the Mercedes Júlia Adão school to launch the program.

“Ao Redor da Iberoamérica” ​​​​​​​​is intended for students aged 10 to 11, who will carry out educational, recreational and creative activities in the classroom until October. The program, which has been running for 10 years, in this edition has as its theme “The urgency of water care”, the aim of which is to make children aware of the protection and reuse of water. In the 2009 edition, when the program was called “Ao Redor do Mundo”, the student Bruna Eufrásio Pereira from Timbé became the national champion, representing the city of Tijucas.

The initiative is implemented in seven Latin American countries where Veolia operates: Brazil, Argentina, Chile, Peru, Colombia, Mexico and Ecuador. In Tijucas, 180 students from two municipal schools participated in the program, which is part of the almost 7,000 students who will represent Brazil. At the presentation, both students and professors received educational booklets that, in addition to covering the topic, also suggest recreational and didactic activities. 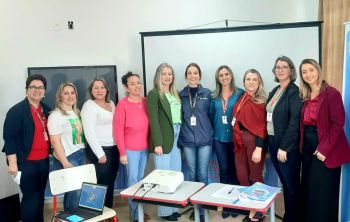 Representing Veolia Brasil at the event, commercial coordinator Emilim Miranda spoke about the importance of the city’s participation in “Around Iberoamerica”. “This partnership with the municipality of Tijucas has been going on for many years, we are very happy that Municipal Education is participating in this program, according to the purpose of the company, which is ecological transformation,” he noted. For the municipal secretary of education, Deise Juliana Silveira, “children and adults become more aware people through education. We try to leave as a legacy this small seed sown in children’s heads, because they will be multipliers of the message in their families and communities,” he said.

For Raphael Callou, director and head of the OEI Representative Office in Brazil, the joint action with Veolia is extremely important for the country and the world. “Brazil recorded several episodes of water scarcity at the beginning of this century. According to OEI studies, this crisis is related to water supply, sanitary sewerage, urban cleaning and solid waste management, but, above all, to a change in perception about the conscious use of water. Veolia’s initiative, in partnership with OEI, is key to promoting civic education in schools in Brazil,” he said.

Until the month of October, children will carry out didactic, recreational and creative activities in class. At the end, they will participate in a cultural competition. For this, they will have to develop a project that contributes to the economy and the care of water, applying the knowledge of the different actions seen in the classroom. The student should record a 3 to 5 minute video presenting the project and describing its environmental benefits.

Each school will select the three best videos and send them to the Municipal Department of Education, which will forward them to Veolia Brasil. A special committee of the company and OEI will select the three best videos from Brazil for voting on the program’s social networks. The national winner will be awarded a Digital Package that includes a computer, printer and internet for one year, along with a scholarship for a course of their choice.

Veolia will also reward the best school with a digital kit consisting of three computers and a printer. In addition, at the end of the competition, all participating students will be awarded with gifts from the company.


Grupo Veolia wants to be a reference company in ecological transformation. Present on five continents with 230 thousand employees, the Group helps its partners in the design and implementation of customized solutions that meet the challenges of water, waste and energy management.

With its three complementary activities, Veolia contributes to the preservation, restoration and development of access to available resources. In 2021, Grupo Veolia supplied drinking water to 79 million people and provided sanitation services to 61 million, with the production of around 48 million megawatt-hours and an estimated 48 million tons of waste. Veolia Environnement (Paris Euronext: VIE) consolidated its revenues to 28.508 billion euros in 2021.