THE Campinas Commercial and Industrial Association (ACIC) launches on the night of this Friday, September 9, 2022, the book “ACIC – 100 years ahead of its time”. The launch event will be at the Sociedade Hípica de Campinas, limited to invited guests.

The publication marks the centenary of the association, completed on November 21, 2020, and will be available in the main libraries of Campinas and also on the ACIC website, in a digital version, from the third week of September.

The work, hardbound and limited to 1,000 copies, is 194 pages divided into seven chapters ending in the month in which the entity celebrated its 100th anniversary.

The president of ACIC, Adriana Flosi, signs the presentation and explains that the project is intended to serve as a reference on the importance of the association in the context of the history of Campinas and the trade of the city. “A parallel is drawn between the extraordinary social, political, economic and cultural facts, both at the national and international level, that have influenced the transformations of the municipality since it was a rural neighborhood in Vila de Jundiaí, to its consolidation as a technological center. and innovation. ACIC, as the main interlocutor of the economic sectors with the government and the community, was the protagonist in this transformation process, from the opening and closing of the first heavy iron doors of stores in the city, to the digital transformation of operations and the dedication of electronic commerce, operating 24 hours a day, seven days a week. a week”, says the president of ACIC.

According to the entity, it took more than two years of documentary, bibliographic and pictorial research, along with interviews, to compile a publication filled with interesting facts about the work of ACIC, which goes beyond the representation of economic sectors. An example is the use of the association’s first computers in the elections of 1982. Through them, Campinas was the only city in the country that year had a computer service for publishing the counted votes for mayor and governor.

Journalist Valéria Forner signs the texts and the edition. Valéria worked in communication vehicles such as Correio Popular newspaper and Metrópole magazine, both in Campinas, in addition to editing books published by Terra da Gente, including “A vida dos Peixes in Fernando de Noronha”, by João Paulo Krajewski and Ivan Sazime, and “Wings of Life”, Ciro Porto.

The narrative unfolds in chronological order and is accompanied by elements, period images and timelines. The graphic project, authored by Charles Souza Leite – who is also responsible for creating the cover – follows the evolution of time, starting with neutral tones and photos in sepia, or black and white, to reaching strong colors in line with color photos. in the final chapters.

The foreword is signed by Guilherme Afif Domingos, former special advisor to the Minister of Economy, Paulo Guedes. Afif was president of the Federation of Trade Associations of the State of São Paulo, the São Paulo Trade Association and the Brazilian Service for the Support of Micro and Small Businesses (Sebrae), in addition to serving as the Vice-Governor of São Paulo. 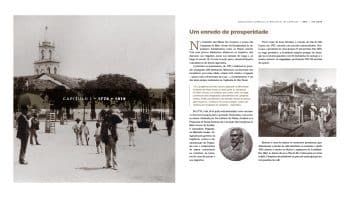 Chapter I, from 1774 to 1919, deals with the sequence of prosperity events that took place in Campinas, from the sugar cane cycle to the coffee cycle, until reaching the initial urban core of the city, formed around the current Praça Bento Quirino. , where the religious, administrative and judicial authorities of the city were located. The inauguration of the Companhia Paulista de Estradas de Ferro that connected Campinas with Jundiaí was one of those events. The yellow fever epidemic, which decimated the population and contained the ideals of modernizing the city, at the end of the 19th century, later elevating Campinas to the “Phoenix City” for its rebirth after the plague, is also depicted in this chapter.

Chapter II, 1920 to 1939, focuses on the economy during World War I. This time, the creation of the Campinas shopping center is highlighted, on November 21, 1920 in the Salão Nobre da Sociedade Luís de Camões, on the initiative of a group of businessmen from the city and with the participation of 121 merchants. A little later, with the change of name to Associação Comercial de Campinas, the entity opened its first registered office, on the top floor of Casa Cristofani. The chapter also includes the crash of the New York Stock Exchange and the Great Depression, the Constitutionalist Revolution of 1932, and the beginning of industrialization in the city, among other important events.

Chapter III, from 1940 to 1959, deals with major achievements in turbulent panoramas. The Estado Novo in Brazil, the creation of the Companhia Siderúrgica Nacional (CSN) and the National Industrial Training Service (Senai) by the government of Getúlio Vargas, to the construction of Brasília, are listed. In Campinas, the first Law on Construction was drawn up to define the new urban perimeter and regulate construction specifications in the city. At this stage, ACIC opened its main building, on Rua José Paulino, in the center of the city.

Chapter IV, from 1960 to 1979, was already developed due to the metropolitan vocation of Campinas, with the growth of its population, which reached twice the national average, the abolition of electric trams and the inauguration of the international airport of Viracopos. , which resulted in the reorganization of air traffic in the state of São Paulo. It is in this chapter that stands out retail, which records an expressive growth of 53% in the number of establishments, and Rua Treze de Maio becomes one of the most contested points by traders in the central area, residential stores such as Americanas and Muricy, among others. It was also during this period that ACIC opened a stock exchange office at its headquarters, with the participation of the director of the Central Bank and members of the Board of Directors of BV de São Paulo.

In Chapter V, from 1980 to 1999, the facts “from railways to optical fibers” are told, as the book says. Facts such as the Diretas Já campaign, the re-democratization of Brazil and the implementation of the Cruzado and Real plans are mentioned in this chapter. In Campinas, the most important are the opening of the Center for Monitoring the Environment and Natural Resources by Satellite (NMA), currently Embrapa Territorial, and Shopping Iguatemi, among others, with the implementation of the Rótula system to regulate the flow of vehicles in the area. Campinas Center.

At the same time, ACIC, ahead of other commercial associations in Brazil, installed a computer in its headquarters, after years of negotiations involving IBM, and created its data processing sector and also began to have a seat on the Board of Directors. State of São Paulo (Jucesp).

Chapter VI, from 2000 to 2019, deals with the creation of the Metropolitan Region of Campinas (RMC) and the inclusion of the ACIC in discussions on the application of resources allocated to it, such as basic sanitation, transport logistics, among other topics. relevant for the development of municipalities. The association, in addition to continuing its mission as a spokesperson for the economic sectors, started a partnership with Boa Vista -SCPC, which at that time was engaged in projects for the restoration and revitalization of public areas and the architectural heritage of Campinas, such as the fountain on Praça 9 de Julho , clock at Estação Cultura, Palácio da Mogiana and Rua Treze de Maio.

It was during this period that ACIC, in its 90 years of foundation, broke paradigms and elected its first president, Adrian Flosi, initiating a restructuring process, both in terms of professional and physical management, in the construction of the headquarters. The chapter highlights events and actions, such as training programs, cost control tools and others “aligned with the transformations of society in the new century and technological progress, driving forces of knowledge and development,” as described by the author.

The centenary year 2020 deserved a special Chapter VII. This year, Campinas was elevated to a metropolis, the largest mobile phone operators in Brazil began testing fifth generation technology, and the National Micro and Small Business Support Program (Pronampe) was created. But the essence of the chapter is ACIC’s century-old identity, digital transformation of the entity, adaptability in meeting Revolution 4.0 and, especially, with the Covid-19 pandemic. The fact that changed behaviors around the world was described from the period of outbreak of the pandemic, in March 2020, to November of the same year, when the tests of the vaccine against the coronavirus began, hinting at the post-pandemic scenario. which will be part of the next chapter of ACIC, according to the 105th year.

Book: “ACIC – 100 years ahead of its time”
Online version: www.acicampinas.com.br (from the third week of September). And in libraries: Municipal, Unicamp, PUC-Campinas, MIS (printed version)